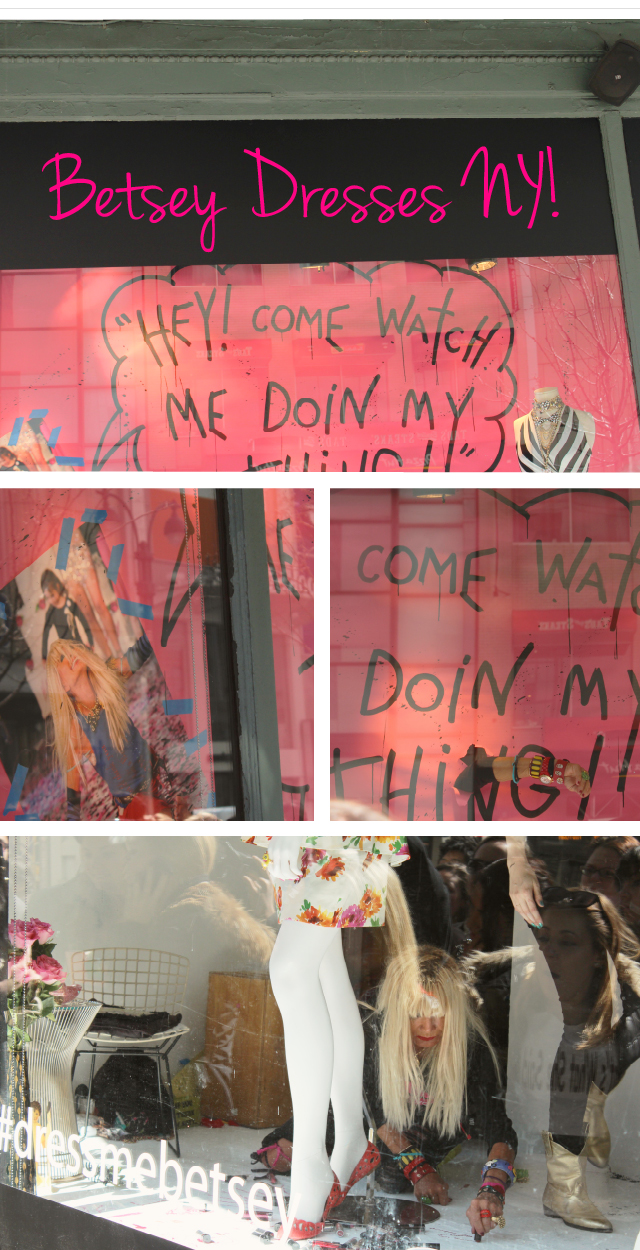 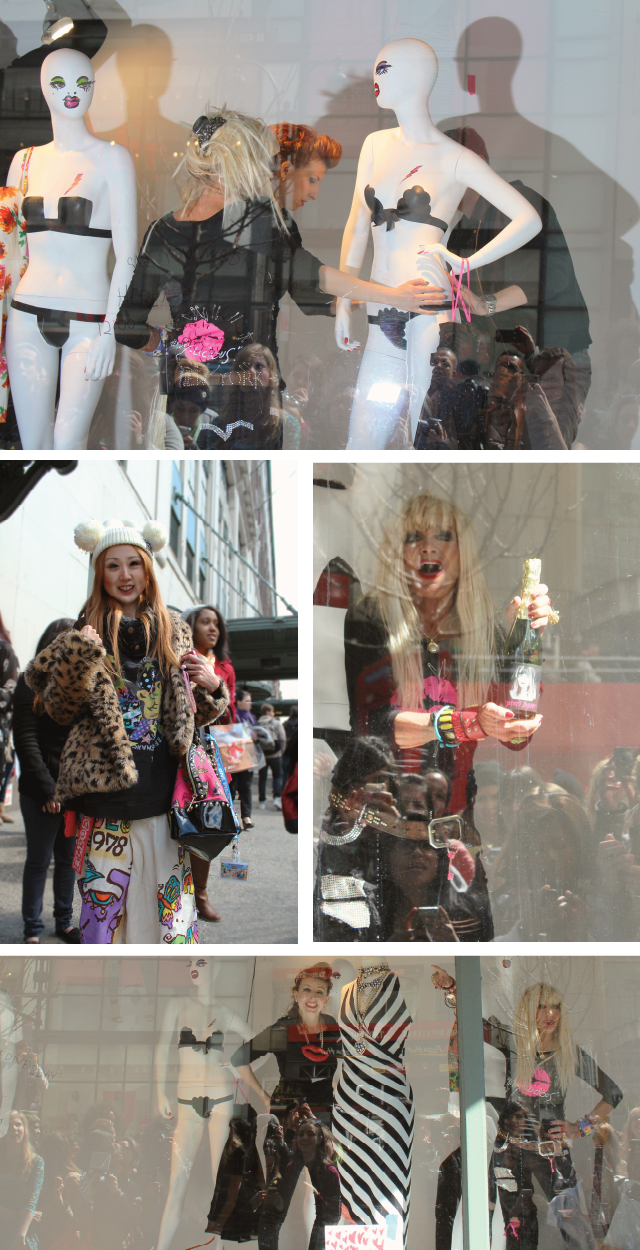 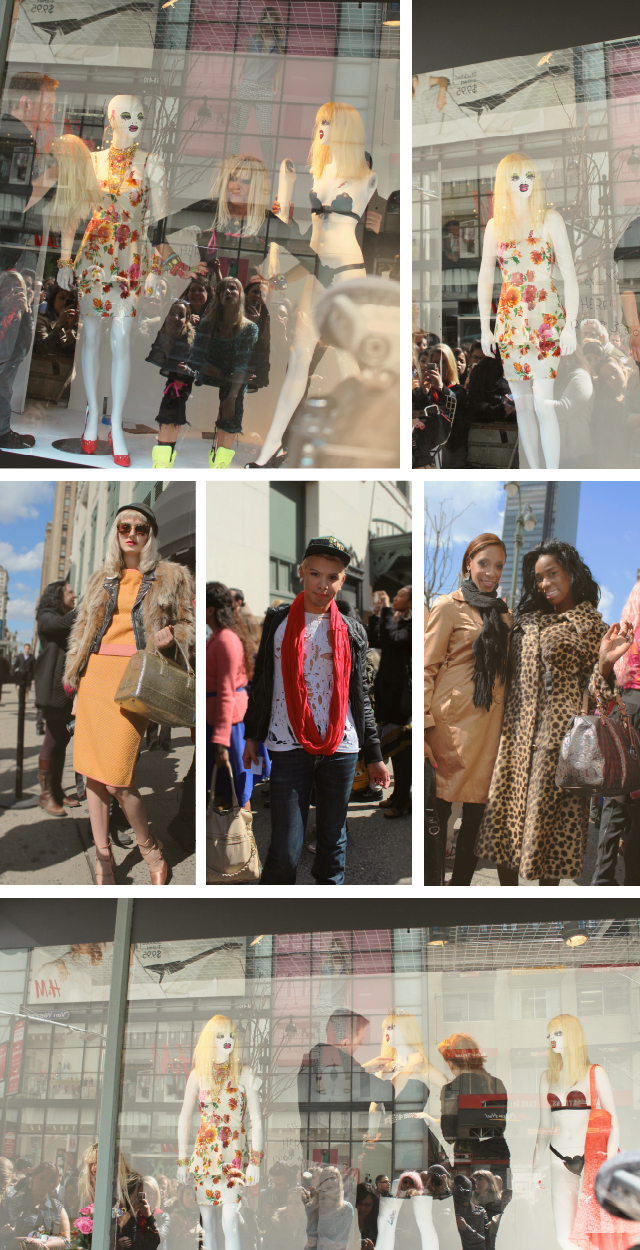 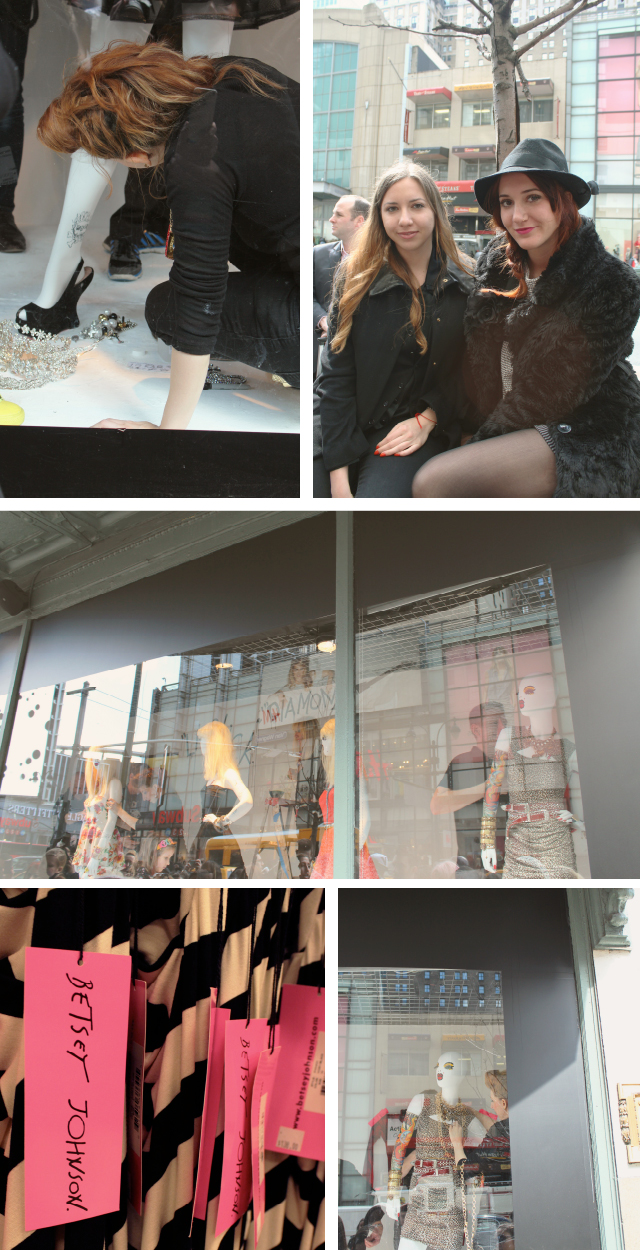 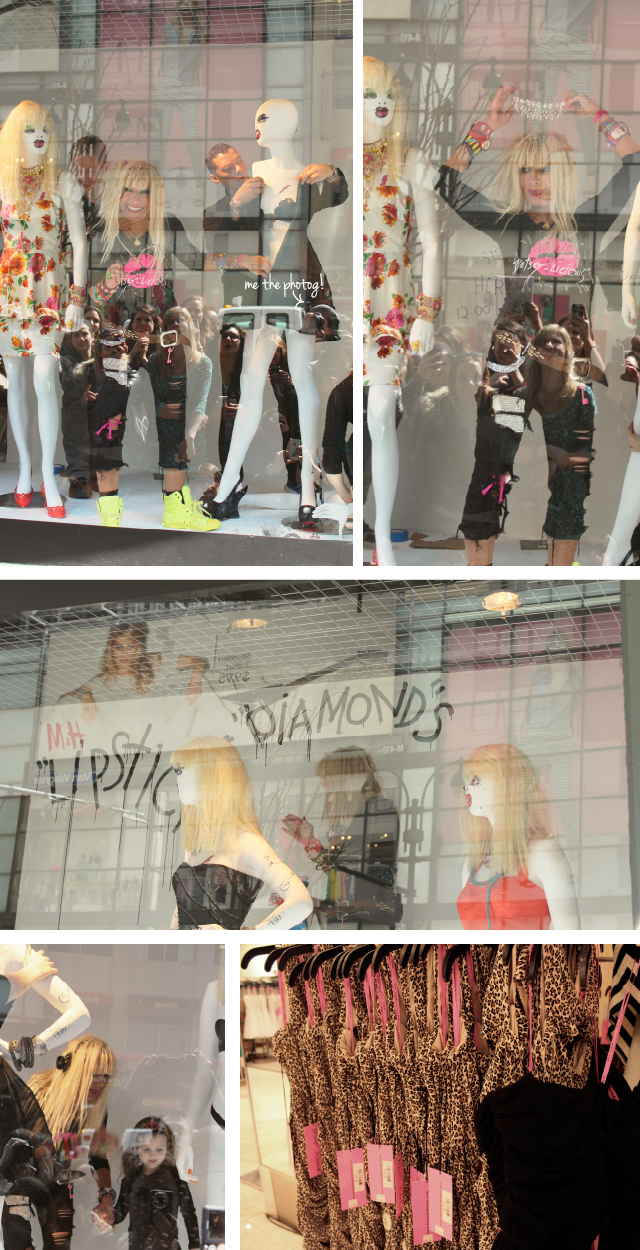 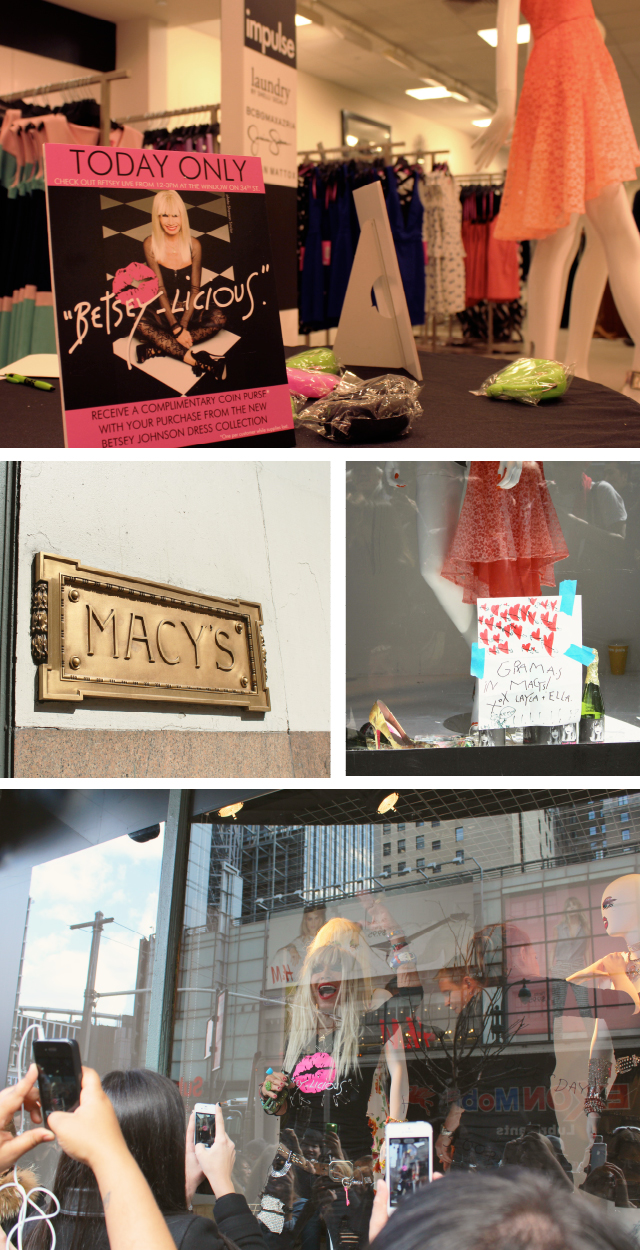 I have always been a fan of Betsey Johnson and the first designer dress I ever bought was a Betsey Johnson. It was a sleeveless black turtle neck mini dress with over sized zippers on either side of the turtle neck. The zippers also had big hoops at the end of them so it looked like you were wearing earrings. It looked very sixties mod and I wore this dress to death!  So Wednesday I headed over to Macy’s at Herald Square as rumor had it that Betsey Johnson would be dressing the windows live. I arrived early and there was a small crowd gathered in front of the Macy’s window. As I had time to spare I ran to Starbucks to get a coffee. Well as usual, and is generally the case at any Starbucks in New York, there was a line. Needless to say my coffee run took longer then expected, and when I finally returned the crowd had tripled in size! So much for my front row seat. There was a hot pink sign that read “Watch me do my thing!” and that is one of the things I have always loved about Betsey – her love of hot pink!
Everyone was eagerly staring at the windows and chatting amongst themselves when someone suddenly noticed a tear and then another and then a hand and arm popped out and waved at us. Betsey had finally arrived, she tore through the paper in her usual punk rock fashion grinning from ear to ear. The crowd cheered and waved back and then Betsey did her thing!  There were four bald mannequins in black lace undies just waiting for their turn to be dressed and primped. Betsey chatted through the glass, aided by a microphone of course and introduced her team and let us know about her new line of dresses to be sold exclusively at Macy’s. Then she and her team got to work! There were rub on tattoos, oodles and oodles of jewelry and each mannequin was donned with a blond wig. The first “gal” was decked in a floral peplum number, the second one was a little edgier in a black lace flouncy mini dress and a ton of bling on her arm. The third mannequin was dressed in hot orange-coral colored dress with a textured bottom and the last one was the most punk rock in a form fitting leopard print dress and red belt. The first three dresses were strapless and the last one had a peek a boo cut out right below the neck. And all four had the Betsey touch! She will also be designing active wear for Macy’s as well. And if this new line is anything like her dresses, it will be sure to be a hit.
The event was such a blast, I can’t believe I was standing there for three hours! Time flew. There was music to get the crowd going – everything from Rihanna and Katy Perry to David Bowie and Madonna. And the crowd itself was half the fun. I met lots of interesting people like Stella Rose in her gold knit dress and pill box hat and Jean Claude in his red infinity scarf. I also met a blogger named Martha with a blog called MdollNYC and another blogger named Alina who has a blog called The StyleSocialite. I also met a young women named Falicia who owns her own chain of lash extension salons which you can check out at www.fracassilashes.com
The only thing that marred the event a bit, was a crazy car chase. An ambulance and a black van collided with one another and then drove up on to the sidewalk. The black van appeared to be trying to escape and after ending up on the sidewalk it backed up crashed in to the ambulance again, it then backed up a second time and charged down the sidewalk with scores of people running for cover. Luckily as far as I know, no one was hurt. But wow, that shook me up a bit. The crash literally took place directly cross the street. If it took place on the side of the street we were on, we would have been the ones running for our lives.  Just wow,  is about all I can say about that!
I am so glad I got to attend this fun and memorable event. To me Betsey Johnson is a living icon and she still has that spark and lust for life she is known for. She has handed down this lust for life to her granddaughters one of whom played in the window with her and waved happily to the cheering crowd. And we will be seeing more of Betsey and her daughter and grand daughters this April when her reality TV show Betsey + Lulu airs on The Style Network.  So be sure to tune in, I mean, Betsey a living icon doing her thing? Some how I think this is going to be my favorite  new TV show of the spring seas
To see more Betsey’s dresses go to Macy’s.com
All images owned and copyrighted by ALLIE NYC.  Please do not use without permission and crediting Dressing Ken ( www.ALLIENYC.com ) Feature image of Betsey Johnson via OCWeekly.com
XOXO

Let the outside in